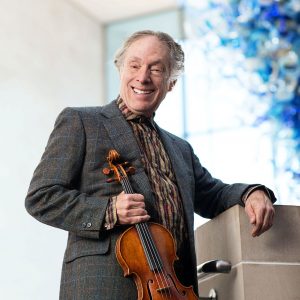 Charles Castleman was born in Quincy, Massachusetts, in 1941. When he was only six, he appeared as a soloist with Arthur Fiedler and the Boston Pops Orchestra, and at nine, he made solo recital debuts at Boston’s Jordan Hall and New York’s Town Hall. He was a student of Ivan Galamian at the Curtis Institute of Music (1959–63), and also coached with Josef Gingold, Henryk Szerying, and David Oistrakh, as well as receiving AB and MA degrees from Harvard University and the University of Pennsylvania. In 1963 he was a Silver Medalist at the Queen Elisabeth Concours in Brussels, and in 1966 was a Bronze Medalist at the Tchaikovsky Competition in Moscow. He made his Philadelphia Orchestra debut in 1963 with Eugene Ormandy, playing Wieniawski’s F-sharp Minor Concerto, and in 1964 made his formal debut at Town Hall.

In 1970 he organized the Castleman Quartet Program, an innovative workshop in solo and chamber music performances, which recently celebrated its 48th anniversary. From 1972 to 1975 he was a member of the New String Trio of New York, and he also played in the Raphael Trio from 1975–2000, which made tours of the United States performing Haydn, Beethoven, and Dvorak cycles. He has appeared with orchestras in Boston, Chicago, New York, Philadelphia, Mexico City, and Moscow and also appeared at many festivals and given numerous master classes in the United States and abroad. As a teacher, he has presided over numerous master classes around the globe.

A published musicologist, Charles Castleman has been the author of articles on Renaissance madrigals and violinist-composers. In 1975 he became professor of violin at Eastman, where he was chair of the Strings Department for eight years, retiring in 2015. He is now Professor of Violin at the University of Miami, and maintains a busy performing and teaching schedule.