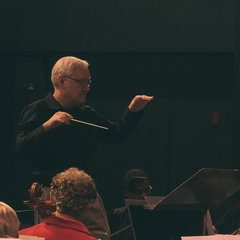 Christopher E. Johnston is a native of the Washington, D.C./Northern Virginia area. A composer, conductor, and pianist, he has been a prominent figure in the D.C.-area music scene for over 25 years. He received his Bachelor’s of Music in composition from Indiana University and his M.A. in conducting from George Mason University. He is the author of numerous choral, orchestral, and jazz ensemble works. In 2002, he composed From Far and Away, a work for narrator and orchestra commissioned by the Reunion Music Society, Inc. The NOVA Symphony Orchestra premiered the work in October of that year to commemorate the RMS’s 10th anniversary. Chris has been praised by The Washington Post for his work as conductor of the 1997 world premier of Nancy Binns Reed’s “The Blue Opera.” As instructor of Music and Computer Technology at the Fairfax Academy for Communications and the Arts, he designed the state of Virginia’s first music technology curriculum, and for the past 17 years has been a pioneer in developing music technology programs nationwide. In 2005, he received national recognition for his work in music education as a recipient of the Claes Nobel Distinguished Educator Award. In 2006, he was a recipient of the Wolftrap Foundation Scholarship Award in which he designed and produced a project where eight young composers created and premiered a new multi-movement work entitled “Suite for Electric Guitar and Orchestra.” In 2008, he was the recipient of the LFI 2008 Virginia Leadership in Education Award and was honored by approximately 400 business and community leaders for his innovative work in music education. He is a three-time Grammy “Music Educator of the Year” nominee. An advocate for performances of works by young composers, he has conducted many of these during his tenure with the NOVA Symphony Orchestra.