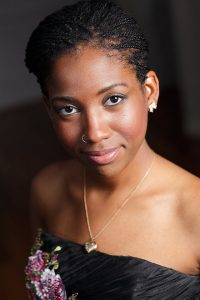 Integriti Reeves is a dynamic vocal powerhouse whose “Modern Vintage” style exists at the crossroads of jazz music, embodying the past, present, and future of the genre. Her voice elicits comparisons to the dulcet purity of Ella Fitzgerald and the smoky effortlessness of Nat King Cole. Her experimental outlook is inspired by contemporary artists such as Feist and The Bird And The Bee, whilst her signature retro look pays homage to icons of the 1950s.

In early 2014, Integriti participated in the highly selective, Betty Carter’s Jazz ahead program, a residency for young composers and performers The residency is held at the John F Kennedy Center For The Performing Arts.

In 2013 Integriti served as an Artist-In-Residence at the prestigious Strathmore hall arts center.

Integriti is perhaps best known for her performances with Afro-Blue, Howard University’s award-winning vocal ensemble. The group advanced as finalists on the 3rd season of NBC’s The Sing Off competition.

Integriti is also a classically trained violinist. She began her Suzuki method violin studies at the age of 6 and went on to study with renowned teacher David Strom. It was under Mr. Strom’s tutelage that Integriti discovered her love of playing and deep purpose in teaching children to play the violin. Integriti has registered training through the Suzuki Association of the Americas in books 1-4. In 2015 Integriti developed her own private lesson studio, Music with Integriti, and has since become a highly sought after teacher in the Washington metropolitan area.

Her debut solo Ep Stairway To The Stars was released in March of 2014. It features an eclectic mix of jazz standards, Brazilian rhythms and pop influences.

In May of 2014, Integriti received the degree of Master of Music from Howard University.

Integriti’s music occupies the genre of straight-forward/ modern jazz. Her original compositions reflect her roots in classical jazz, whilst incorporating the storytelling elements of folk music. Her musical influences range from jazz standouts Sarah Vaughn and Dexter Gordon to hip-hop groups like A Tribe Called Quest. Her creativity, however, extends beyond her music. Integriti also has a love for vintage clothing, interior design and is an avid, visual artist, and poet.