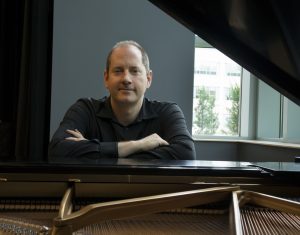 An American composer based in the Washington DC area, the music of Jonathan Kolm combines rhythmic intensity, haunting lyricism and rich harmonic colors. His music has been performed across the United States and abroad and many of his recent works incorporate environmental and scientific themes and have a STEAM (Science, Technology, Engineering, Arts, Mathematics) focus.

His music has won prizes and awards in many competitions including the American Prize, the Swan Prize in Music Composition, the Percussive Arts Society Composition Competition, the National Federation of Music Clubs Competition, Voices of Change Composition Contest, the Austin Peay State Composition Competition, as well as many others. He has been commissioned by a wide range of artists and ensembles and his music has been heard at such festivals as June in Buffalo, highSCORE, Beijing International Composition Workshop, MUSICX and the Ernest Bloch Festival. He has had artist colony residencies at Ipark (Connecticut), Brush Creek Ranch Arts Center (Wyoming), the Kimmel Nelson Harding Center (Nebraska), and the Virginia Center for the Creative Arts. His choral music has been performed by some of the leading choirs in the United States, including the New York Virtuoso Singers, VocalEssence, the Princeton Singers and the Young New Yorkers’ Chorus and his work for men’s chorus “Songs for the People” was performed at Lincoln Center (Alice Tully Hall) by the University of Michigan Men’s Chorus. His music has been called “fluent in its diversity” (Mark Kanny, Pittsburgh Tribune-Review Classical Music Critic) and “deeply moving” (Chamber Music Today).

He maintains an active performing career in new music and has appeared in recitals in many colleges and universities across the United States. In addition to his work as a composer and pianist, he teaches composition, piano and music theory at Northern Virginia Community College where he serves as Associate Professor and advocates for various environmental and social causes in the nation’s capital.