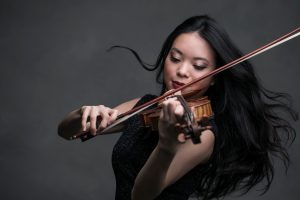 Praised by The Baltimore Sun for her “impeccable technique…deeply expressive phrasing…and poetic weight,” Sirena Huang is one of her generation’s most celebrated violinists. She brings not only technical brilliance and powerful artistry to the stage, but also a profound sense of connection to her audience.

Motivated by a deep wish to inspire peace and harmony with her music, Sirena has performed before world leaders, thinkers and humanitarians. She has appeared at the World Peace Conference held in Petra and at the Opening Ceremony of the “Forum 2000 World Conference” in Prague, among others.

In addition to her TED Talk in 2006, Sirena has been featured on numerous radio and television broadcasts, including WQXR’s McGraw-Hill Young Artists Showcase, and NPR’s “From the Top” as well as several interviews with WNPR, CNBC, WTNH, WTIC, WB20 and Beethoven Radio.

Sirena is performing on a violin by the Brothers Amati, c. 1624 courtesy of Guarneri Hall NFP and Darnton & Hersh Fine Violins, Chicago.